This Sims 2 blog follows the lives of the Nuidya tribespeople of the northern mountains, as they try to survive, thrive and figure out what exactly it means to be a lizardsim. Along the way, there'll be drama, romance, utter silliness and lots of cats. Just watch out for those storm demons - they're sneaky. :)

On one hand, Zita couldn't quite believe this was happening. She knew Branch felt silly in the traditional white facepaint, and she wasn't sure she wanted to know what was going through Dayvid's head right now. 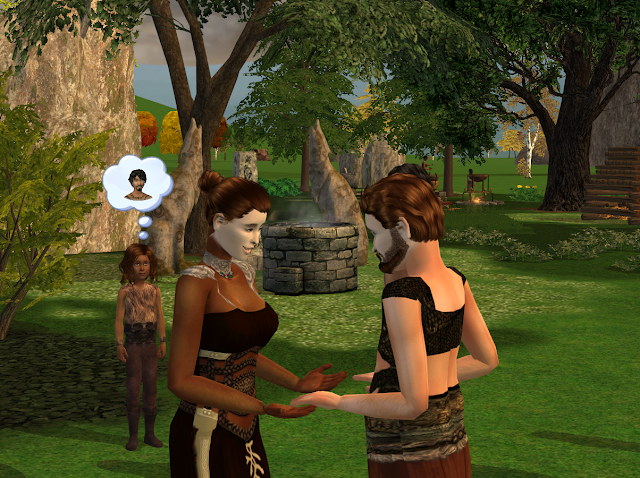 There had been a time, moons ago when Vedrafe was a young apprentice healer, when she'd thought her brother was the worst choice for a shaman the ancestors could have ever made. Now, taking on the role herself and training her own apprentice, she was starting to wonder if maybe Pel zan-Nate would steal that title. The young risfe was a good student, but hardly the natural leader type the position really required.

At least she had her best friend, Melchol zan-Ku, to turn to when things got a little too much to handle. 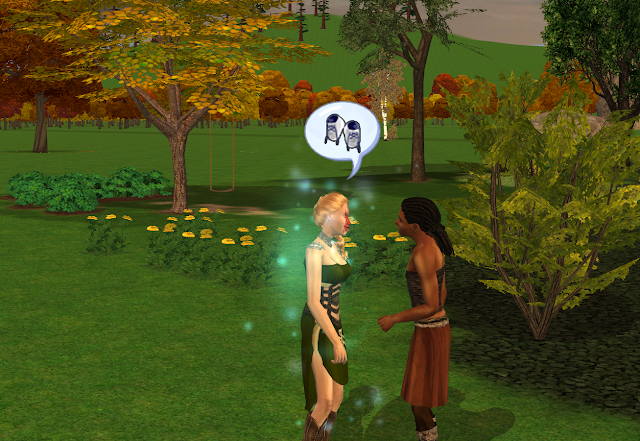 "All I'm saying is, if we take any more baby steps Pel's going to start needing wrap changes. I just can't see them* being taken seriously once I'm not around to keep an eye on things."

"Don't give up just yet," Melchol replied. "You might be surprised. Ask any of my siblings, they'd never have picked me as most likely to take charge of an entire village's resources. But I did, because there wasn't much else I could do while I looked after Abina. Maybe Pel will step up too, once they have no choice in the matter."

Vedrafe didn't look convinced. "No choice is the exact reason I took Pel on in the first place! They're the only risfe in the entire tribe. That has to mean something, to the spirits at least..." 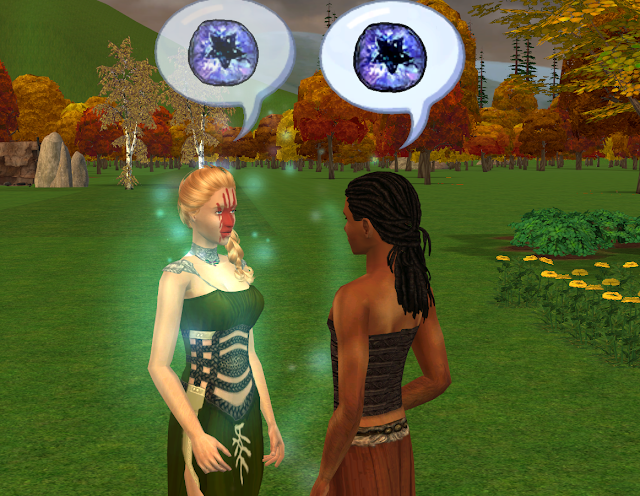 "What do the stones say?" Melchol asked. Reading fortune stones was the most common method of divination Vedrafe used.

"The stones...." Vedrafe's voice was faint. "No, I'm not getting much from them, not as far as Pel's concerned." She shook her head.

Melchol placed a hand on Vedrafe's shoulder, and gently said "Then maybe we should forget it for a while. Forget Pel, the stones and the fact that we're responsible adults." He smiled and added "Race you to the swing!" before turning and running in that direction . 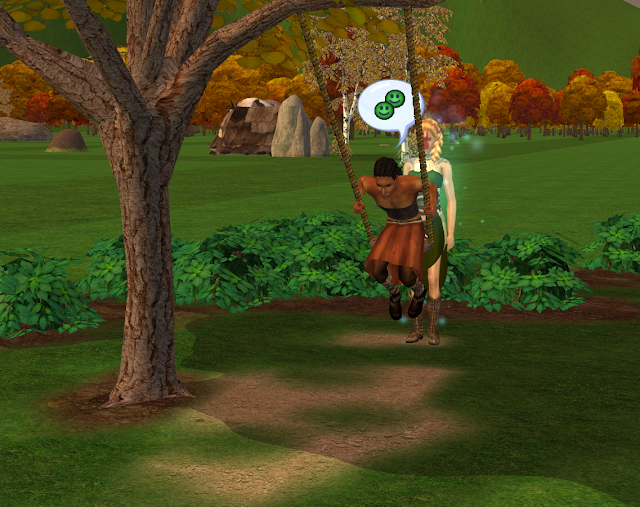 That was exactly what Vedrafe loved about Melchol - he rarely goofed around with anyone besides her, and always seemed to know what to do to make her feel better. She had to admit she had some feelings for him... and maybe also for his older brothers, Sophos and Pollux. What was it with those zan-Ku men?

The next day, Vedrafe, Pel and several other villagers made their way into the forest to gather as much food as they could find. This foraging trip would probably be the last of the season - winter was taking its time to arrive, but the air was getting colder each day. Storing food had become first priority for Kulo Seeri. 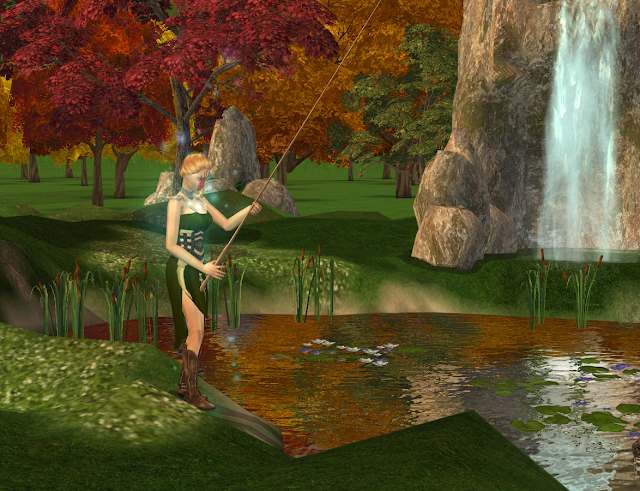 The group stopped beside the small lake in the middle of the forest, and Vedrafe headed for the far side of the lake so she could catch a few fish while still keeping an eye on the goings-on. Pel stayed snacking on some of the nuts and berries with the rest of the party, much to their mentor's surprise. 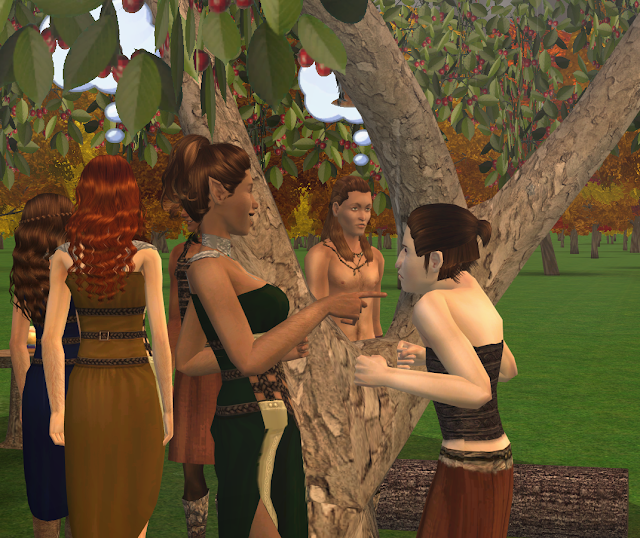 She'd expected Pel to join her, if not to fish, then at least to get away from Moli and Petal. With Vedrafe close to her apprentice, both women mostly left them alone, but still seemed to enjoy picking on Pel at every opportunity they got. It already looked like it was going that way, even though Vedrafe could see everything that was happening. 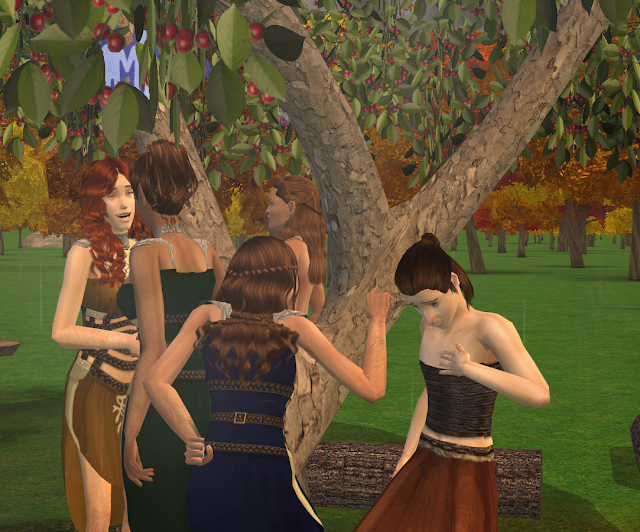 Pel didn't seem particularly bothered by Moli's taunts - Moli tended to pick on everyone - but as soon as Medeia zan-Shola distracted her, Petal zan-Ace swooped in with a barrage of insults and finger jabs. Petal was Zita's eldest daughter, born and raised in Moonlight Falls; she and Pel had hated each other from the start, not that anyone had been able to discover why. 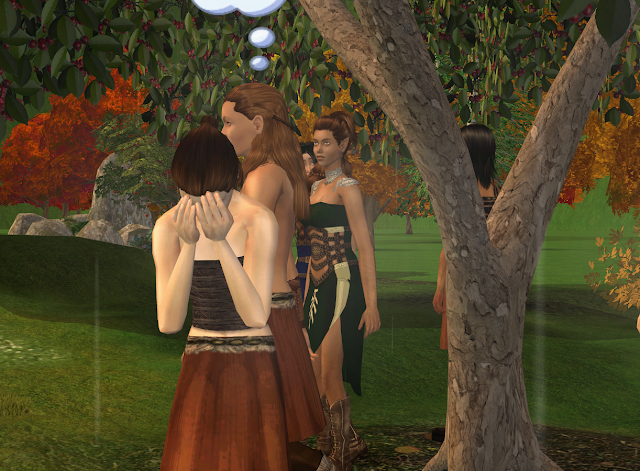 Actually, Vedrafe suspected that Petal had a crush on her apprentice. If that was the case, Pel hadn't figured it out - they looked extremely embarrassed by the time Petal let it drop.

Either way, it couldn't carry on. It was bad enough that there were bullies like Moli and Petal in Kulo Seeri in the first place, but Pel never tried standing up to either of them. If they'd been apprentice to anyone else in the village, it wouldn't have been as much of a problem, but a shaman really needed to command respect. Pel would be the third highest ranking member of the tribe one day - how could they take on that responsibility when everyone walked all over them? 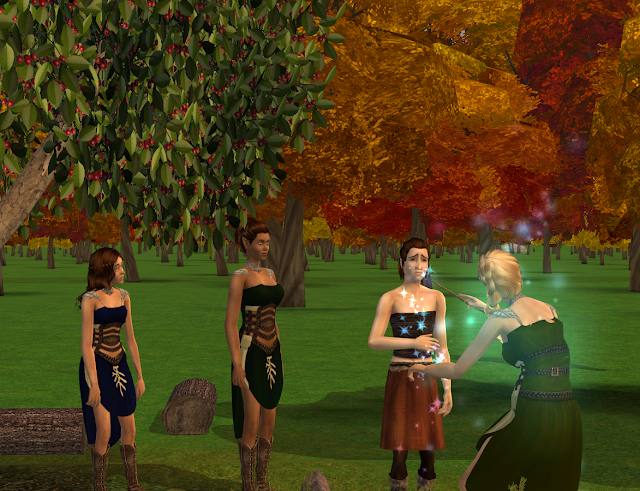 Enough was enough. Vedrafe picked up her fish and stormed over to the other side of the lake, where a very upset-looking Pel was taking yet more of Petal and Moli's nonsense. She drew her wand, targeting the two women with one of her more powerful friendship charms, willing them to treat Pel with more kindness for as long as the spell lasted. 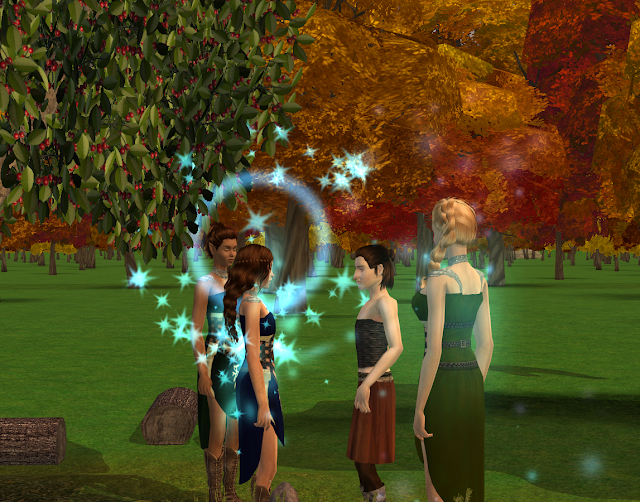 A flash of light surrounded the pair. Pel stepped forward, probably guessing what Vedrafe had done.

"Hey, Petal..." they started to say, before being pulled away by their mentor. Vedrafe was relatively sure the charm had worked, but she wasn't taking any chances if it hadn't. They were heading back to her tents for another lesson, whether Pel wanted to stick around or not.

It wasn't long before Petal arrived there. She's followed us back, Vedrafe thought, maybe she does like Pel? She left her working tent, motioning for Pel to follow her, and quietly assuring him that her spell would stop Petal trying to pick fights with him for a while. 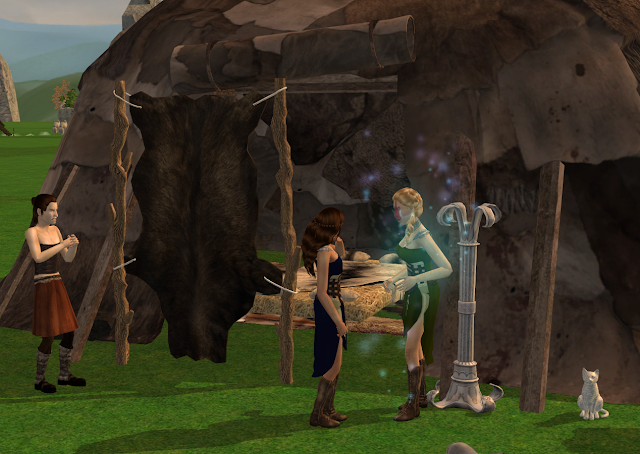 Vedrafe greeted Petal, and suggested that she might want to admit to Pel how she felt about them.

"I'd be happy to, Vedrafe," the younger woman said, before Pel cut in with "Only if I get to go first!"

Pel slowly walked towards Petal, and told her "I've been wanting to say this for a long, long time..."

Vedrafe smiled to herself. Was this the unexpected union she'd received the sign about? 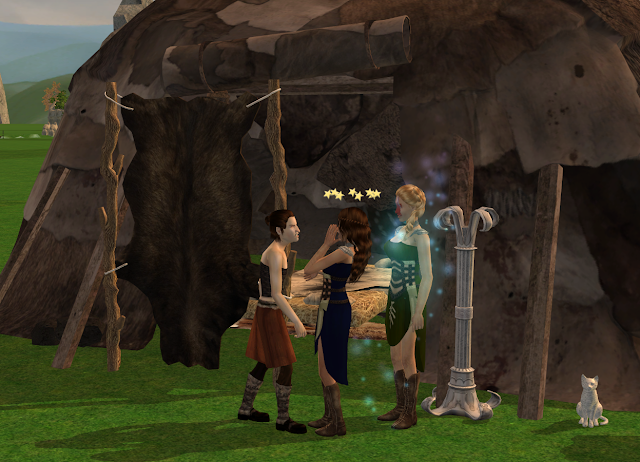 However, she was snapped out of that thought as she saw Pel slap Petal and yell "Go back to Moonlight Falls and leave me alone for once!"

Of all the times for her apprentice to grow a spine. Well, she'd been given her powers to act as a shaman, not a matchmaker...

********** *Although Nuidya culture has three genders, their language doesn't use gender-specific pronouns. So, the translation convention in this blog is to use "they/them" for risfe. As a "they/them" risfe myself, and the inventor of the Nuidya culture and language, I don't mind this at all. - VT
Posted by VT at 04:11 2 comments:

About the (Weird) Author

VT
VT is an eccentric recluse living in rainy England. She devotes most of her time to TS2, which she uses to escape modern life, not to recreate it. Therefore, some of the stuff she posts about may seem a little off-the-wall. You have been warned.