This Sims 2 blog follows the lives of the Nuidya tribespeople of the northern mountains, as they try to survive, thrive and figure out what exactly it means to be a lizardsim. Along the way, there'll be drama, romance, utter silliness and lots of cats. Just watch out for those storm demons - they're sneaky. :)

6th Birthday Special: Blast from the Past

OK, so the actual sixth anniversary of the creation of the Nuidya isn't until tomorrow (April 16th is another two hours away in Rainy England as I write this), but I just couldn't wait to get this post up. First, because it's an actual update (sort of); second, because it's the first update coming from my new state-of-the-art gaming computer, which means I will soon be playing and blogging regularly again! Yay!

It's because of the new computer that I have this update now, actually. While I was transferring my files from my old computer to my external hard drive, I came across a backup of the original Nuidya hood - including all its pictures. I took loads in those days - the hood was originally a very, very bad alphabet legacy, which it has (thankfully) outgrown. So I decided to bring all my one reader my top 15 favourite nostalgic snapshots... but be warned, there are a lot of embarrassing confessions about my goofy younger self's goofy playstyle ahead, as well as enough ret-conning to choke a comic writer. :)


I'm starting off with the first ever picture I took in the original hood, "founder" Sena Nuidya, now known as Sena Yuleng (The Firstborn). 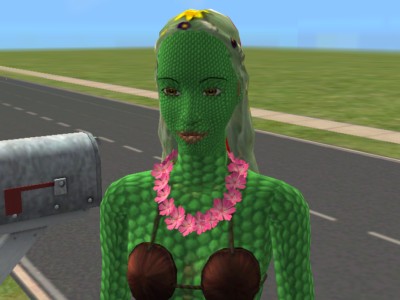 Now: she is of alien descent. No one knows much about her past, only that she was found as a baby in a crashed spaceship, and raised by another tribe. She was a skilled hunter and fighter, and used that talent to provide for her family after settling on an uninhabited island. She is now the most revered of the Nuidya ancestors.
Back in the day: she was an experiment with custom content. I frequented the old official TS2 site then, and thought there was only one way to write a legacy, so I played her as the same air-headed founder type everyone used. Her descendants would be outraged if they knew that. 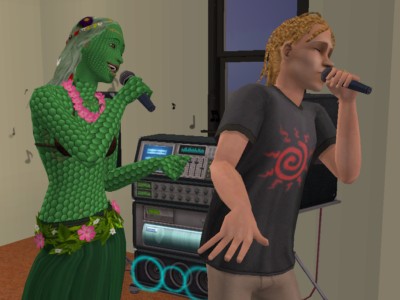 Obviously, this picture was taken before the Nuidya mistrust of technology came into play (before I took them seriously, actually).
Now: the blond guy, Benjamin, was Sena's husband. He left SimNation after graduating college to live with the tribe who raised Sena, and fell in love with her. They left that village together (for reasons I admit I'm still not clear on) and founded what is now Kulo Seeri. He's also a revered ancestor, though slightly less revered than Sena, because some of the elders actually remember him being alive.
Back in the day: he was townie Benjamin Long, before I had empty templates and a need for some sort of explanation why townies are wandering around. (The ones who married in in later generations were explained away by a convenient shipwreck when I needed an excuse.) He was also something of an airhead, despite being a Knowledge Sim, because I thought all legacy Sims had to be stupid when I was fifteen. 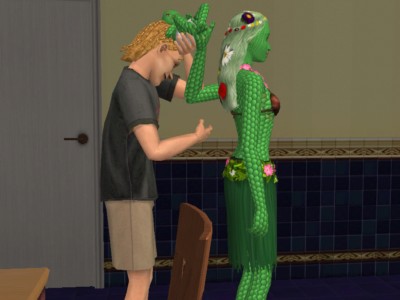 There is no historical significance to this shot. It's just an outtake. Can't be all serious - it certainly wasn't then. I think the baby is Azanni. 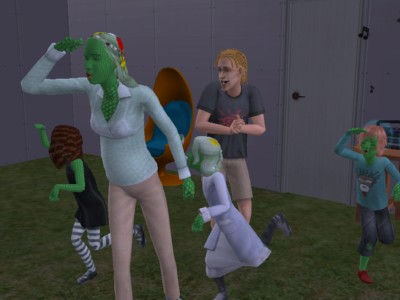 This is one of the few full family pictures I have from the first generation. I can't tell if Benjamin is dad dancing or laughing at the others smustling.
Now: the kids are, from left to right, Azanni, Avira and Avei. Azanni was the tribal leader after Sena died - no one talks about that now. Avira was the first shaman; she was a twin, she had three sets of twins, and her daughter and granddaughter continued the tradition. Avei would have been a hunter and warrior like his mother, if he didn't have seven kids.
Back in the day: I tended to force stereotyped and exaggerated personalities onto my Sims. The kids were basically nothing but trouble, although I can't recall every detail - I think Avei wanted to rule the world as a kid. Azanni was the legacy heiress; her thing was being a rebel with a thousand causes. I think I gave Avira the ability to predict what was going to happen in the next photo. 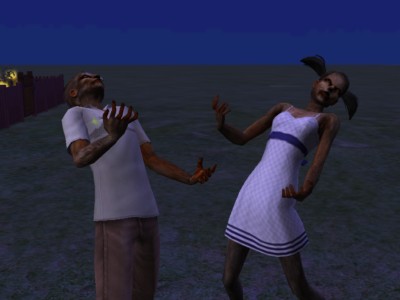 These are the other twins, Ace and Asaro, who appeared in the last picture as Sena's baby bump. They were werewolves.
Now: Asaro and Ace were very close, and even lived together after moving out. They were the first Nuidya lorekeepers. Asaro only had two kids, both of whom died in the Great Plague of 61 (or whenever it was) but Ace still has descendants. Some of them still carry the werewolf gene - there are three with the trait at the moment.
Back in the day: Asaro is an old Maltiazi word for cat, before I knew how to make my languages make sense - all she said in my bad legacy story was "meow" and only Ace understood her. Ace basically just wandered around occasionally translating meows, if I remember. His name is pronounced /AK ay/ and means "shade beneath a tree" in Old Maltiazi. At least that's what I decided later. 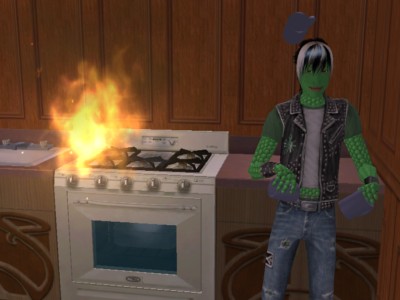 Another outtake. Avei was a very responsible teenager, as you can see. (Typical Sims, sticking something in the oven ant then juggling mugs while it catches fire...) 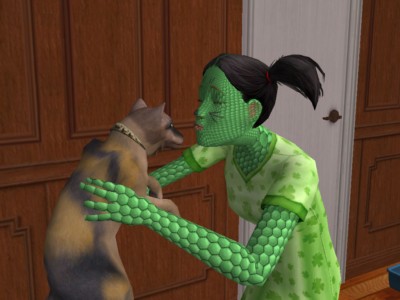 Asaro thought she was a cat, as well - at least in the legacy. I forgot to mention that.
Now: the cat (I can't remember its name or whether it was male or female - hmm, I think this is the male) was one of two that the family adopted when I installed Pets. They are the ancestors of the Min Ra breed - the sacred cats of Kulo Seeri.
Back in the day: I seriously thought a "catacy" was a good idea. Heck, if I was using words like "catacy" I probably thought anything was a good idea. 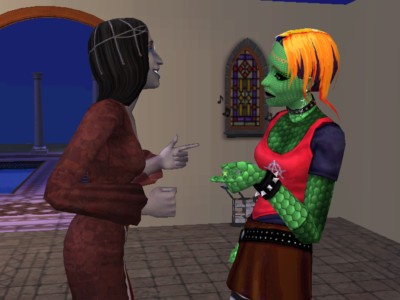 The five kids of Generation Two went off to university, because there was nothing in the Big Book O' Nuidya that said formal education made no sense then.
Now: it never happened. Enough said. But...
Back in the day: it was a blast! Azanni (that's her in the picture) started a Greek house. Her first pledge was a cheerleader (also in the picture) who fell in love with a cow mascot and became a vampire, which made going to class difficult. 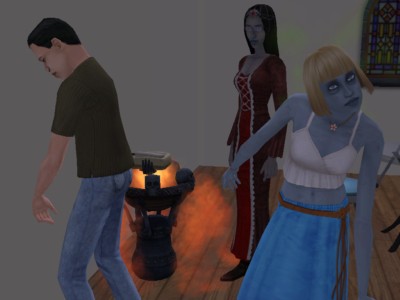 After Azanni left, she raised two dormies from the younger twins' dorm who had accidentally died, using a bone phone swiped from the secret society. I think they were called Knut and Lexie. I wish university made sense again. 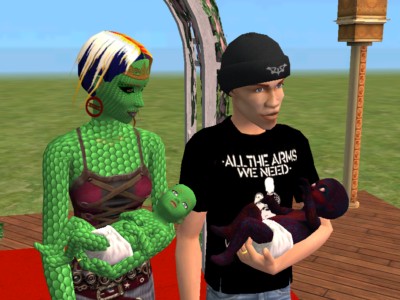 This is around the time I learned about default replacements.
Now: Azanni married Russ Bear, one of the shipwreck victims. They had a daughter, Bara (green baby) and on the same day, Russ gave birth to alien daughter Zadi (purple baby). Both died in the Great Plague of Whenever-it-was. I miss them.
Back in the day: Russ was the burglar who robbed the house when Azanni was a kid. I hadn't given up on forced caricature personalities then, either - Bara was a mad scientist, while Zadi was a hippy (I was trying to break out of the "all legacy Sims are dumb unless they're aliens, in which case they are super smart and evil" rut). 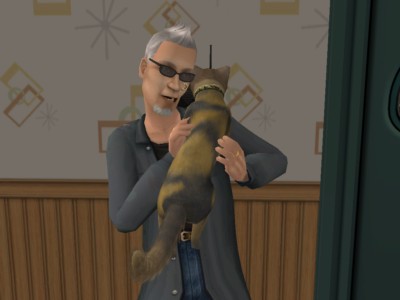 Another outtake. Benjamin (in his midlife crisis outfit) is actually standing in front of the phone, but I think it looks more like he's calling someone on his cell cat from this angle. :) 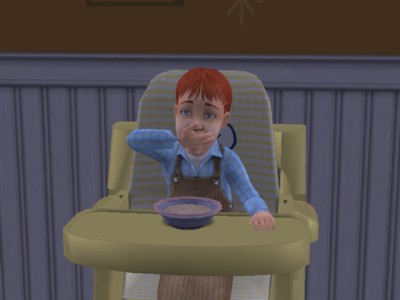 Azanni and Russ had another kidlet, Beretu. If he was alive today I would probably have picked another picture - but he's cutest in this one.
Now: I have to admit Beretu doesn't feature in Nuidya history much. He may or may not have survived the Great Plague and subsequent Great Storm of 65 (I keep debating about whether I should bring him back).
Back in the day: I think he was the third-gen heir, not that he got a chance to take over before the hood glitched up and stopped being a legacy. He also sold brushes. I can't remember why. 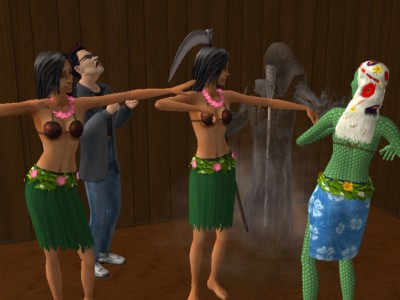 Sena died in the year 49. I couldn't listen to the song that was playing on their stereo without bursting into tears for a year afterwards. (I'm not ashamed to admit that!)
Now: Sena died around the same time the first TS3 rumours started. Azanni, who suddenly found herself leading the tribe alone while the threat of a new dimension lurked round the corner, became paranoid that everyone was out to get her, and eventually became a tyrant who, among other things, banned the number three. She died in the Great Plague before anyone had a chance to revolt. (This is why today's Nuidya don't like to be overly restricted.) Meanwhile, Sena was reborn as a cat.
Back in the day: This is more or less what actually happened - the cat bit? Well, a cat in Ace and Asaro's house gave birth to a single female kitten at the exact time of Sena's death. If that hadn't happened, I doubt the Nuidya would worship cats quite as much. 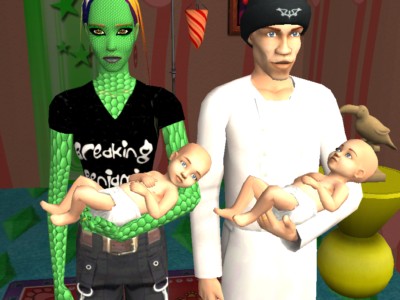 This is where what actually happened according to the game and what actually happened according to the Kulo Seeri lorekeepers start to agree. Azanni's third and final pregnancy produced twin girls Banei and Binidu. I can't tell which is which, but Binidu is the only one of her kids who's still alive. Basically, Azanni (or The Arzep - the Nameless One - as she's now known) thought that because they were the result of her third pregnancy, they would be evil. She dumped them off on Uncle Avei - who was already tainted from having had triplets, or so she claimed - and got on with being a raving lunatic. Binidu still resents that. 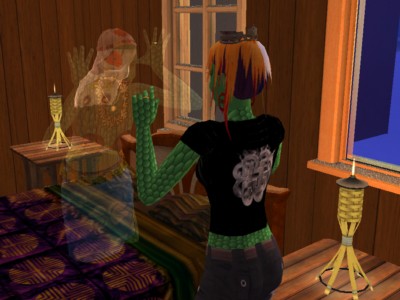 Obviously, Grandma Sena wasn't going to take that lying down. She did occasionally pop back to give her daughter a piece of her mind.

And then I lost the hood to glitches.

VT says: No idea how this nonsense developed into the Kulo Seeri of today. Still, I've enjoyed every minute of the last six years of playing. Here's to many more!
Posted by VT at 22:36

About the (Weird) Author

VT
VT is an eccentric recluse living in rainy England. She devotes most of her time to TS2, which she uses to escape modern life, not to recreate it. Therefore, some of the stuff she posts about may seem a little off-the-wall. You have been warned.